What is the Cost of Inaction?

Numerous studies have been written about the economic cost of flooding and deteriorated water quality on New Jersey and the local economy. New Jersey experiences significant flooding impacts in both the coastal areas as well as “upland” areas, such as properties adjacent to rivers and streams. And the risk of these flooding events is growing over time due to change in the climate. New Jersey’s Rising Coastal Risk[1] report predicts that there are 23,000 more homes and other buildings worth a combined $13 billion at risk of frequent flooding today than if sea levels had remained at 1980s levels. There are 27,000 more buildings worth a combined $15 billion that are now likely to flood at least once a year. Moving inland to include areas adjacent to streams, nearly 20 percent of all land area in New Jersey is located within a FEMA Flood Hazard Zone, meaning there’s a 1 percent change of flooding every year. These flood zones are home to 10 percent of all the buildings in New Jersey (State of New Jersey Hazard Mitigation Plan)[2].

Flooding impacts are not the only financial hardship affecting property owners in New Jersey. To meet stormwater management water quality compliance requirements under the Clean Water Act, the USEPA estimates that New Jersey municipalities will need to spend $15.6 billion over the first 20 years of their stormwater permit cycles[3]. Neither of these cost estimates include the urgent need to begin a robust program at the local level to maintain, repair, and replace the failing stormwater drainage infrastructure system that’s been neglected over decades.

While the costs of providing improved stormwater management services may be significant, there are also benefits. The New Jersey’s Rising Coastal Risk report estimates that for every $1 spent on flood mitigation, New Jersey is estimated to save $6.56 in avoided cost/impacts (such as less frequent and/or reduced severity of flooding)[4]. In addition, the use of innovative green infrastructure as required by the New Jersey stormwater management rules has been proven to provide quantifiable benefits for water quality, flooding, air quality, habitat and wildlife, and people and communities. A table of the most common benefits to the local economy and community is summarized in below. 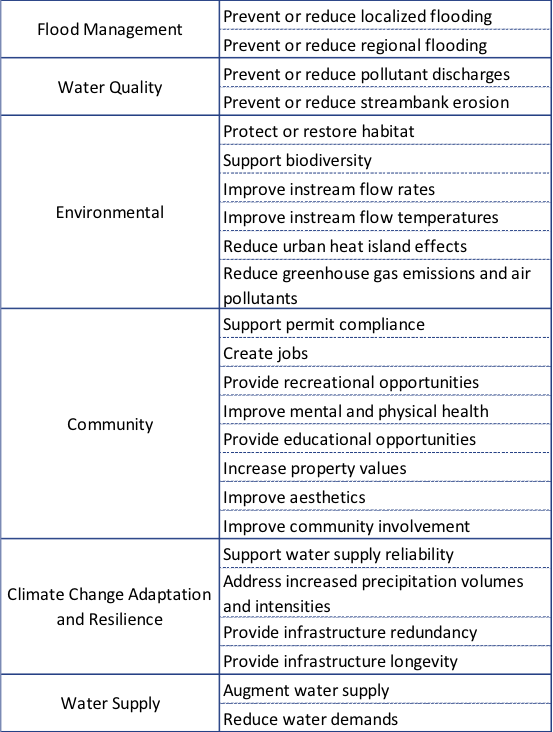